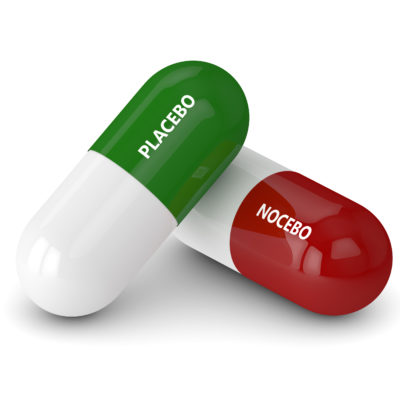 “One of the most successful physicians I have ever known assured me that he used more bread pills, more colored water, and powders of hickory ashes, than of all other medicines put together.”

The meaning of placebo

It is common knowledge that placebo is Latin for “I shall please.” But offering a definition of placebo has proven to be elusive.

For this reason, Moerman and Jonas1 introduced the broad term “meaning response” which they defined as,

“the physiologic or psychological effects of meaning in the origins and treatment of illness: meaning responses elicited after the use of inert or sham treatment can be called the placebo effect when they are desirable and the nocebo effect* when they are undesirable.” (p.472)

The first recorded medical use of “placebo” is found in the 1785 edition of George Motherby’s New Medical Dictionary. But it was William Cullen, the Scottish physician, who employed the term in his series of lectures dating from 1772. 2

Cullen used an active preparation of a drug in diluted form. The use of inert substances dates from the last half of the 19th century.

Placebo effect is a measure of the difference between the effects of placebo and no treatment. This difference is the specific therapeutic effect due to placebo. This effect is always present in clinical practice as well as in clinical trials.3

Placebo response is a measure of all changes occurring from baseline in the placebo group. It includes those changes attributed to: the therapeutic ritual (e.g. a doctor wearing a white coat); being observed; regression to the mean (how unusual events are likely to be followed by events that are more typical); and to fluctuations in outcome due to the natural history of the disease being treated (i.e. the symptoms of a disease can wax and wane).

*Nocebo effect can be translated from the Latin, “nocebo” meaning, “I shall harm.”

In medicine, it refers to the adverse effects of placebo intervention. In clinical trials where a placebo is being compared to an active treatment, there are likely to be adverse effects from the placebo that mimic those caused by the active treatment. For example, in a trial where a placebo such as a sugar pill is being compared to an opioid, both may cause constipation.

Nocebo effect can also be used to describe a situation where patients attach negative meanings and emotions to a treatment perceived to be harmful.4 A negative outcome might then occur due solely to the expectation that the treatment intervention will cause harm.

How effective is the current treatment for OA?

Of the many forms of treatment proposed for OA, most are of little benefit.5 In terms of drug management, current OA guidelines state that nonsteroidal anti-inflammatories (NSAIDs) may be helpful. However, the adverse effects of prescribed medications can sometimes outweigh their benefits, e.g., NSAIDs’ well-known adverse effects, particularly in elderly people.

Non-drug treatments (e.g., exercise delivered in different forms, dietary modification etc.) form the core therapies. The associated benefits, such as pain reduction and improvement in physical function, are supported by good quality evidence. Nevertheless, in practice, these interventions may not adequately control their pain or significantly reduce their level of disability for many patients.

In terms of surgical intervention for OA, clinical standards recommend joint conserving or joint replacement surgery for advanced OA that has not responded to conservative management. Accordingly, patient satisfaction rates associated with joint replacement surgery are usually high. But variability in the type of instrument used to measure satisfaction impedes consistent and meaningful interpretation of the results. Furthermore, some patients with localised OA also experience widespread pain, and their joint pain may persist after total joint replacement. This can be attributed to changes that have occurred in their central nervous system.

As a form of treatment, the placebo can have multiple benefits. It has been shown to be more effective in relieving pain than no treatment. 6

Factors that can enhance the effectiveness of placebo include: the personal characteristics and beliefs of the patient and the clinician; the way in which they interact; the particular treatment being offered; higher cost, and the clinical environment.

In clinical practice, the placebo is an integral part of the treatment effect. The separation between placebo effects and that of the active treatment is only necessary when a randomised controlled clinical trial (RCT) is being performed to evaluate a treatment.

Paradoxically, the efficacy of a treatment obtained from RCTs is often different from that observed in clinical practice. Therefore, the Proportion of the Contextual Effect (PCE) was developed to enable clinicians to improve the quality of care.

Effectiveness of placebo in OA

On average, about 75% of pain relief, 71% functional improvement, and 83% reduction in joint stiffness can all be attributed to the placebo/contextual effect. 7

It appears that the more invasive the intervention, the more powerful is the placebo effect. According to Professor Ian Harris8: “It (bloodletting) was a pretty good placebo due to the fact that it was invasive, painful, drastic and shrouded in pseudo-science.”

8. Harris I. Surgery, The Ultimate Placebo: A Surgeon Cuts Through the Evidence. Sydney: NewSouth Publishing, 2016. (Extract available at: https://www.smh.com.au/national/surgery-the-ultimate-placebo-20160208-gmo484.html)