Yoga is a comprehensive system of philosophy and lifestyle practices that can be incorporated into daily life activities. Yoga is becoming increasingly popular in Western parts of the world and a growing body of research is pointing to its many health benefits – both mental and physical.

Yoga can be practised anywhere and in a solitary or group setting. It can also be practised across a wide range of the lifespan, from childhood through to advanced years. Yoga classes for teens with arthritis have recently been introduced to the suite of exercise classes offered by AOWA.

Yoga classes for teens are designed to provide young people with tools to assist them to deal with the demands of daily life. For teens, yoga can also provide a mechanism to help manage the pressures associated with the transition to adulthood. In particular, for young people with a chronic pain condition, mindfulness and breathing techniques can be incorporated into yoga practice to help calm the nervous system and promote wellbeing.

Specific postures are perhaps the most commonly recognised aspect of yoga. The yoga postures (known as asana) increase strength, flexibility, coordination and balance as well as teaching body awareness. The AOWA yoga classes teach participants to understand where their body is in space and how to recognize habitual ways that they may hold tension in their body. For example, with encouragement repeated gentle reminders about how to move well, participants can become more mindful of their body and begin to notice where they may hold tension as they practice the postures. They can then use this knowledge and awareness to consciously relax tense areas in their body.

Yoga is non-competitive and allows teenagers the opportunity to explore their potential by trying different poses and techniques in a safe and supportive environment. They are taught how to approach more challenging postures step by step and learn how to modify and adapt postures according to their individual capabilities. This can increase body confidence and self-esteem.

Other techniques that are taught include breathing, mindfulness, and conscious relaxation. These are taught with the aim of improving concentration and focus and to encourage self-soothing to promote a reduction in the stress response which is important in managing chronic pain. The Group class setting also provides an environment where participants interact and exercise with others with the same or similar health conditions.

The benefits of yoga given from the perspective of one of the regular participants are summarized as follows:

“I love yoga because it allows me to exercise without the pain and exhaustion that usually comes with it. Not only does it make my muscles stronger and more flexible, but it also improves my mental health. I find that the mindfulness aspect of yoga really helps me to cope with stress and anxiety, especially during exams. I would highly recommend this course to anyone seeking to improve their physical and mental health”. E, age 17.

Writing this article in my capacity as a yoga teacher, I am reflective of how hugely rewarding it is to see young people develop body awareness, confidence in the postures and learn how to relax throughout the course. To see the look on their face as they develop mastery in a pose, or relax deeply at the end of the session, is priceless and inspires me to teach yoga to teens.

The Arthritis & Osteoporosis WA Yoga classes are taught by Theresa Venz, a yoga therapist. Classes run in Term 4 every Monday 4.45 to 5.30 (subject to demand). 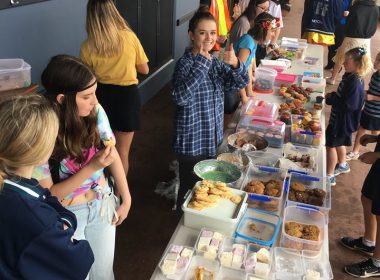 Year 12 students from Serpentine Jarrahdale Grammar School raised an outstanding total of $1,449.30 in just one day!

The money raised on ‘Muck Up Day,’ (their last day of school) is an amazing effort, considering they are a smaller school in a semi-rural area (Mundijong) with a Year 12 cohort of 55 students.

They accomplished this feat by cheekily charging staff for parking, asking for donations at the School zebra crossing, running a delicious bake sale and sausage sizzle, selling raffle tickets for

Adventure World and Hilton Hotel, plus running an inflatable obstacle course and sumo wrestling activities for younger students at lunchtime.

The funds raised will go to our Juvenile Arthritis camps. 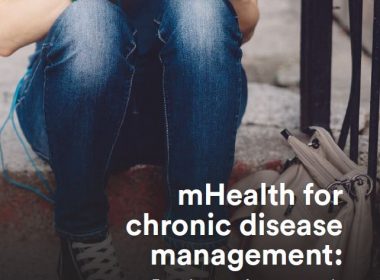 The aim of this project was to identify, appraise and synthesise insights from users (collectively referring to both end-users and implementers) about the characteristics of acceptable and useful mHealth technologies for young people’s management of their chronic non-communicable diseases (NCDs). 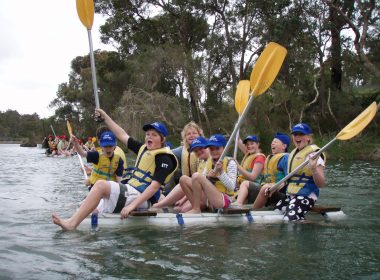 The Eurpoean League Against Rheumatism (EULAR) is the organisation which represents people with arthritis/rheumatism, health professionals and scientific societies of rheumatology of all the European nations.

In June this year, I had the honour of travelling to London to present a paper on 25 Years off Camp Freedom in the People with Arthritis/Rheumatism in Europe (PARE) section of the EULAR conference. Each year, approximately 14, 000 delegtates from over 100 countries attend EULAR, with 75 delegates representing Australia this year.

Camp Freedom is Arthritis & Osteoporosis WA’s camp for children with JIA and has now been running for over 25 years. I am very passionate about Camp Freedom and wanted to spread the word of the work that the Arthritis Foundation, our volunteer leaders and myself have done over those years, and the difference we are making in the children’s lives.

I spoke on the how, what, where and when of camp, and the benefits that the campers receive attending camp each year – with some attending up to 10 years! By the time this article is in print, we will have returned from this year’s camp, which will again be a huge success due to our dedicated team of volunteer leaders.

I also had the pleasure of meeting Simon Stones, the winner of this years’ Edgar Stene Prize for his essay titled “Living with rheumatic or muscloskeletal disease: How I take action to live life to the full”.

In his essay, Simon described his struggles living with a Rheumatic Musculoskeletal Disease (RMD) and taking medications since 3 years of age. He spoke about his will to succeed in his education, despite his illness and absences. Simon was an inspiring young speaker who is living life to the full with arthritis.

The information shared by the PARE presenters emphasised the need for person-centered initiatives that involve patients, carers, health professionals and industry as equal partners.

We also learnt how innovative technologies will become a growing part of the day-to-day management of our long term health conditions and communication with out healthcare teams.

I look forward to returning to EULAR in the not-too-distant future to hear some of the latest innovations from patient advocates from around the world.

2. their perceptions about the associated challenges, service gaps, and their perceived needs and

3. their preferences for modes of service delivery, particularly as they related to the use of digital technologies

To coincide with World Arthritis Day, Arthritis Australia has today announced the launch of a new online resource, called EMPOWERED, to support those living with rheumatoid arthritis (RA), ankylosing spondylitis (AS) and psoriatic arthritis (PsA) to better manage their condition.

Although arthritis is typically associated with an older age group, the results of a new consumer survey of people living with arthritis released today, reveals the hidden struggles the condition is causing among younger Australians (aged 18-49), particularly in relation to their workplace participation, financial status and emotional health.

“World Arthritis Day is a great platform to educate Australians that arthritis is not just a condition that affects older people,” said Ainslie Cahill, Chief Executive Officer of Arthritis Australia.

“Arthritis doesn’t discriminate and can affect anyone. It is vital that anyone who is diagnosed with the condition has the support they need to best manage their condition and ensure their quality of life is not hindered.”

EMPOWERED was developed by Arthritis Australia to provide timely, relevant and actionable information and assistance to people living with RA, AS and PsA.

“Our survey found that almost half of Australians living with arthritis are only just coping or not coping at all with their condition, reinforcing why the launch of EMPOWERED is so important in helping those affected to better manage their arthritis. The ultimate goal of the online resource is to empower people living with these specific forms of arthritis to better understand and manage their condition,” Ms Cahill said.

The survey, conducted by Galaxy Research, also reveals that a quarter of 18-49 year olds believe their arthritis has reduced their ability to hold down a good job, and a third (29%) believe they have been discriminated against at work because of their arthritis1 – highlighting the shortcomings in workplace and community support of this vulnerable group of people.

“It’s disheartening to hear the serious, and often overlooked, impact arthritis is having on the lives of young people living with the condition. Many believe their arthritis has led to financial strain, has caused them to be fearful of the future and put stress on their personal relationships,” said Ms Cahill.

“I urge all Australians living with rheumatoid arthritis, ankylosing spondylitis and psoriatic arthritis, their healthcare professionals and their families and friends, to visit the EMPOWERED site for information, videos and support on how to best manage these conditions,” Ms Cahill concluded.

The EMPOWERED website has been independently developed by Arthritis Australia with an educational grant from Janssen (Janssen-Cilag Pty Ltd).

Arthritis Australia is a charitable not-for-profit organisation, and is the peak arthritis body in Australia. It is supported by affiliate offices in ACT, New South Wales, Northern Territory, Queensland, South Australia, Tasmania and Western Australia. Arthritis Australia provides support and information to people with arthritis as well as their family and friends. It promotes awareness of the challenges facing people with arthritis across the community, and advocates on behalf of consumers to leaders in business, industry and government.

About the Consumer Survey

This study was conducted online by Galaxy Research among members of a permission based panel between Friday 11 September and Tuesday 15 September 2015. Eligibility for the study was determined by claimed diagnosis of arthritis. A representative national sample of 4,332 Australians aged 18 years and older were asked the eligibility question; with the final survey conducted among n=1,052 (26%) who had been diagnosed with arthritis. The study was conducted by Arthritis Australia with an educational grant from Janssen (Janssen-Cilag Pty Ltd).