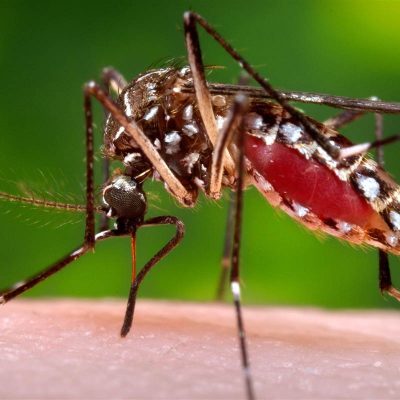 Ross River virus (RRV) is the most common mosquito-borne virus that can cause disease in humans in Australia. It occurs in environmentally-driven transmission cycles between mosquitoes and animals (including humans). RRV is transmitted through the bite of infected female mosquitoes but not from direct contact with another person or animal.

Doctors will order a specific blood test to diagnose patients with RRV. Symptoms caused by RRV typically start with a flu-like illness but can include additional symptoms such as painful or swollen joints, sore muscles, skin rashes, fever, chronic fatigue and headaches. It is not possible to predict how long a person will take to recover from RRV disease as the symptoms and severity can vary greatly between patients.

Although the flu-like symptoms, fever, nausea and rashes may resolve quickly, other symptoms may last for weeks or months. Severe or long-lasting symptoms can cause emotional distress or depression and can affect personal or work relationships.

Some patients have reported that gentle exercise or physical therapies have helped to ease chronic and painful symptoms. There are no specific cures or vaccines for RRV, so personal avoidance of biting mosquitoes is an essential part of reducing the risk of becoming infected.

This can be achieved by taking a few simple steps, such as:
• avoiding areas of high mosquito activity or avoid being outdoors around dawn and dusk when mosquitoes are most active,
• wearing protective (long, loose-fitting, light coloured) clothing when outdoors,
• using a personal repellent containing 20% diethyltoluamide (DEET) or picaridin. Natural or organic repellents are not generally as effective as DEET or picaridin, or may need to be reapplied more often, but they can offer some protection, and
• ensuring insect screens are installed and completely mosquito-proof: use mosquito nets and mosquito-proof tents when outdoors.

Most of the types of mosquito that carry RRV in south-western WA breed in a wide variety of wetlands and water pools in the environment. However, some species that breed in water-holding containers or infrastructure around houses and other buildings (e.g. rainwater tanks, roadside drains and domestic containers such as pot plant drip trays, blocked gutters, disused pools or ponds) are also important carriers of RRV.

People can help reduce RRV risks in their community by preventing the breeding of mosquitoes around their home or work place. Removing containers that fill with rain or reticulation and emptying/refilling other containers (bird baths and animal drink containers) every few days are great ways of reducing mosquito breeding.