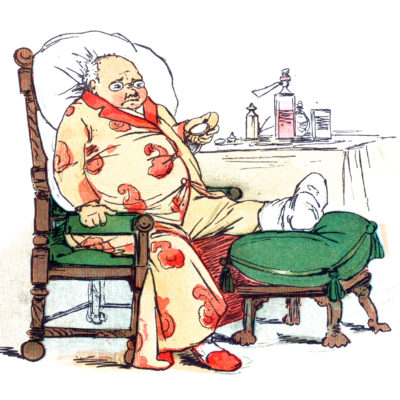 Some rheumatological diseases, such as gout, bear names that reflect their antiquity. Alfred Baring Garrod [1876] referred to gout as “probably one of the earliest diseases to which flesh became heir when man began to participate in the luxuries of civilised life …” (p.1)

The name probably reflected the idea that “a peculiar humour in the blood was thrown out and distilled into the joints drop by drop”. The Latin word for tears was guttae, hence the name gout.

Garrod discovered that an excess of uric acid in the blood was the culprit in gout, but it took a century before the role of another crystal in rheumatic disease – calcium dihydrate pyrophosphate (CPP) – was recognised. This disease came to be known as “pseudo-gout”.  Hence the reference to ‘true or false’ reflected in the title of this article.

According to Dieppe and Doherty [1989], chondrocalcinosis (calcified cartilage) was first described in the mid-nineteenth century by Robert Adams [1857], a leading Irish surgeon.

Adam’s patient (M’Garry) lived in the North Dublin Union workhouse. He suffered greatly from “chronic rheumatic arthritis, which has engaged symmetrically almost all of the joints of the upper limb and many of those of the lower extremities, the ankle included.” At post-mortem, Adams found that “the semi-lunar fibrocartilages (of the knee) were converted to bone”.

With the advent of X-Rays, the appearance of chondrocalcinosis in these same regions was first noted by Bruchholz [1928] and Werwath [1929]. Importantly, calcification of joint cartilage seen on x-ray can be completely asymptomatic.

In 1958, chondrocalcinosis of joints was recognised by Žitnˇan and Sit’aj [1963] as a specific disease identity occurring in a few families. The name they gave to the new disease was “chondrocalcinosis articularis”.

It was unfortunate that the term “pseudo-gout” was coined when McCarty et al. [1962] demonstrated the presence of calcium pyrophosphate crystals in the joint fluid of patients with acute joint inflammation that resembled an attack of gout.

Some 14 years later, researchers in the USA acknowledged that “pseudo-gout” was in fact a great mimicker, that could not only resemble gout, but also rheumatoid arthritis, osteoarthritis, traumatic arthritis, rheumatic fever, ankylosing spondylitis, neurotrophic joint disease, septic arthritis, and even the then recognised “psychogenic arthritis” [McCarty 1976].

More appropriate names for these presentations were obviously needed.

The problem of nomenclature was resolved when the European League against Rheumatism (EULAR) published its recommended terminology [Zhang et al. 2011]:

NOTE: Metabolic conditions that can rarely be associated with CPPD include hyperparathyroidism, haemochromatosis, hypothyroidism, hypophosphatemia and hypomagnesaemia [Rosenthal & Ryan 2016].

Had he been alive today, M’Garry’s widespread and incapacitating arthritic condition would likely attract the label of CPPD. Although the treatment administered to him by Adams is not recorded, application of local heat, warm baths, a bland diet, and encouragement to walk regularly would have been recommended. Adams may have also prescribed regular doses of Dover’s powder (a combination of ipecacuanha and opium) to relieve pain and to induce perspiration. It was a popular patent remedy in the 19th century, but had completely disappeared by the mid-20th century.

Links for more information on CPPD: