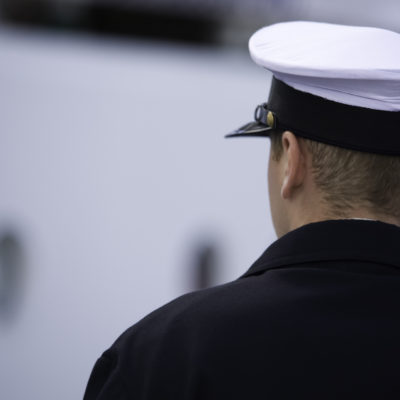 With hindsight, my ankylosing spondylitis story began when I was eleven years old. Whenever I put any weight on my left leg, I began to experience acute pain centring around my groin and buttock area. I recall being admitted to Princess Margaret Children’s Hospital in Perth, where I received injections in my thigh over a period of a week, at the end of which, I was able to walk and jog without any discomfort.

Over the next nine years, nothing as major as another hospitalisation occurred – just infrequent lower back pain, which didn’t inhibit me from pursuing my sporting interests of mainly cricket, football, baseball, athletics and tennis.

In 1961, at the age of twenty, I enlisted in the Royal Australian Navy. I did three months of training at a depot in Victoria, and it was during this time that the pain and stiffness became more frequent and prolonged. A visit to the naval medico did not throw any light on the cause – I was basically told he could find nothing wrong with me.

After my training I was posted to my first ship, but within a couple of months the pain-free breaks between ‘pain-free’ were becoming shorter and shorter. A visit to the ship’s doctor proved fruitless, after a cursory examination, I found myself being asked if I was homesick? It was obvious the doctor thought I was presenting with an ‘invisible’ painful condition, and so I went back to my duties.

I suppose it made it hard for people to see any problem because my physical appearance was of a well-built, sporty youth with no visible signs of disability. In turn, I kept quiet about the pain to avoid being labelled a whinger or hypochondriac.

Just before my ship was due to head to Asia, I went to see the ship’s doctor again. This time he sent me off for x-rays, but they didn’t show anything abnormal. I later came to understand that this is common in the early stages of ankylosing spondylitis. Again, I was left to carry on and grin and bear it.

After re-joining my ship which was going through an extensive refit, I spent a few months in Sydney. By this time, a new doctor had taken up the position on board, and I resolved to pay him a visit while we were in dry dock. Once again, the doctor’s visit proved pointless, as his attitude ultimately did not allay any of my concerns.

A few weeks later we took to sea once more, again heading for Asia. By this time, I was pretty much in constant pain, which made it extremely difficult to sleep at night. Not wanting to be brushed off by the doctor again, this time I insisted I be referred to a specialist. We were due to arrive in Yokosuka, Japan so he agreed that he would organise for me to see a specialist at the US naval base there.

The ship’s doctor presented me with a sealed envelope and told me to proceed ashore to the naval base centre to hand to the specialist. As I made my way to the base, I carefully opened the envelope, and only needed to read the first two sentences before my suspicions were confirmed. They were along the lines of, ‘I have examined him on board ship and can find no reason for him to be suffering any back pain. He appears to be a fit and robust male.’

Even though I expected as much, it still angered me as I read those words. Nevertheless, ever the optimist, I still held hope that the American specialist would be able to throw some light on the cause of the problem.

After the physical examination, which took less than five minutes, he told me to get dressed while he scribbled something down on paper before slipping it into the envelope. He said nothing to me about the examination he just carried out – he just handed me the envelope saying, ‘Take this back to the ship’s doctor.’

As I walked past the reception desk, I turned and asked the receptionist, ‘Excuse me, do you know the doctor’s name who attended to me?’ She replied ‘Oh, he’s not a doctor – he’s a physiotherapist.’ Here it was I thought, it is happening all over again.

Returning to the ship doctor’s office, I was determined this time that I would not leave until he agreed to refer me to a specialist dealing in back problems. Seeing that my words were not a request but a demand, he arranged for me to see a rheumatologist at the British military base when the ship docked in Singapore.

The specialist in Singapore immediately made me feel at ease, and to my surprise, he asked me to relay my back pain from the beginning – when it started and what made it worse. I told him all about the pain spasms I experienced from just coughing or sneezing, the sleepless nights due to pain, and other symptoms. I could sense that he was hanging onto my every word, which filled me with a sense of relief that someone was finally believing me.

He stated he knew what my problem was but wanted me to immediately have x-rays done to confirm. After the initial x-rays were done, I was admitted to hospital to have further x-rays. When all the x-rays were completed, the specialist turned to me and said, ‘Ben, there’s good news and bad news. The good news is that we have a definitive diagnosis: you have a condition known as ankylosing spondylitis (AS), which is a chronic arthritic condition. The bad news is that there is no cure for it.’

You might think I was devastated by what I had just heard but, strangely that was not the case. I finally had something conclusive to throw in the face of all the doubters I had encountered in the past three years, from fellow ratings to officers to doctors. Far from feeling devastated, at that moment, I felt a sense of vindication.

I am sure there are many people with similar stories of delayed diagnosis, particularly from my era. So much more is known about AS, and the diagnostic tools available to the medical profession today result in a much timelier diagnosis.

Upon diagnosis, you can either do nothing and let your condition dictate your life, or you can take control and educate yourself, using your mind and willpower to have a good quality of life. But how do you do this? Well, a good starting point is to participate in an information course run by the Arthritis Foundation in your area. This is an excellent first step, and it will help to establish a plan that includes a program of exercises specifically designed to limit the impacts AS has on you.

Finally, it must be said that the control I am talking about must be an ongoing commitment, as AS has no empathy for those who do nothing. Remember, your fight with ankylosing spondylitis is a winnable one!

AOWA’s Arthritis KEYS Programs are informed by medical evidence and aim to empower people to live well with arthritis. Led by health professionals, the programs will teach you about strategies and skills to assist you to manage your arthritis effectively. Click here to view our current programs.

Purchase ‘A Practical Guide to Living with Ankylosing Spondylitis’, published by Arthritis & Osteoporosis WA.  The book contains expert advice on ankylosing spondylitis and is written by Australian Rheumatologists and other health professionals. Copies of the book can be purchased for $30 (includes postage within Australia) by calling 1800 011 041 or online here.