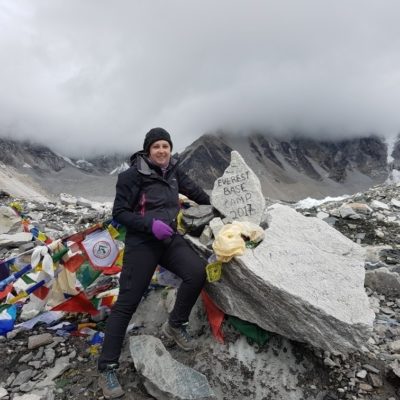 My name is Lana, and I have been living with Juvenile Idiopathic Arthritis (JIA) for the last 27 years. When I put a time frame on it like this, it makes me think I am much older than I am, however, I just turned 29 years old.

I was diagnosed with JIA when I was 2 ½ years old.

I was an active toddler, always climbing trees, playing with my dog, running, and falling. It was due to this that my parents did not think too seriously when they noticed I had a swollen knee and a slight limp one day. They took me to the doctor, suspecting that I had just fallen over, not expecting to be referred to a specialist.

We went from specialist to specialist trying to get an answer. One doctor suggested performing an arthroscopy as it was a very common procedure for footballers. The procedure would help him to look inside my knee and hopefully give my anxious parents some answers. Despite wanting an answer, the thought of drilling into their toddler’s knee seemed all too much. After all, I was only a toddler, not a footballer!

After the initial diagnosis, I was immediately placed on medication to control my symptoms. These medications left me covered in bruises and with dental issues. I remember having good days and bad days. There were nights when I would wake up crying from the pain in my knees and days where walking to school or playing in the backyard was just too painful for me.

As the years have progressed, I have been on many different medications, some with worse side-effects than others, but I can finally say that I have found a medication that works for me. I feel the best I have ever felt. I am more active than I have ever been in my whole life and I love it! I keep myself busy, playing Oztag three or more times a week and going to the gym almost every day.

I still have days where I have more pain than other days, but I have my ways of managing this and working around it to remain as active and positive as I can.

In April 2017, I decided to set a personal goal to trek to Everest Base Camp. I quickly realised that I would need help to prepare my body for such a huge trip. I joined a gym and began working with a personal trainer that specialised working with people with arthritis. My one-on-one sessions with the trainer would help me to prepare my body for the challenges I would face on the trek ahead.

Despite the training, the trek to Everest Base Camp was, without a doubt, the hardest thing I have ever done and will probably ever do. The six days of walking to get to base camp were filled with tears and ibuprofen. I had taken my medication before I had left for the trek, and I had planned to take it when I returned.

Unfortunately, due to the extreme weather changes (we went from hot 35-degree days to snow and negative temperatures in the space of six days) and lack of electricity, I decided not to take my medication with me. It worked out well though, as I have my injection once a fortnight and the trek fit in perfectly within this timeframe.

When I finally made it to Everest Base Camp, I was so emotional I had to sit down to take it all in. Despite my arthritis, I had just walked for six days through rough and rocky terrain, up and back down steep mountains. After having my photo taken at Base Camp, my partner surprised me by getting down on one knee to propose. I thought I could not possibly be more emotional and that nothing could top surviving this trip, but that was the cherry on top.

It has been almost a year now since my six-day trek to Everest Base Camp, and I have to say, that I still cannot believe I got there! Yes, I still have my struggles living with arthritis, but I am indeed one of the lucky ones. I am fortunate to have such a great network of support, and I am grateful to be on medication that allowed me to reach my goal.

I know there are lots of people that I have spoken to that don’t suffer from a debilitating disease, yet would not even consider attempting to trek to Everest Base Camp, but I did, despite living with JIA for the last 27 years!

This story was used by permission from Arthritis Australia.