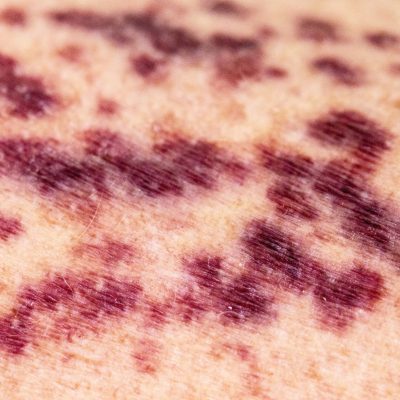 IgA vasculitis (IgAV), formerly called Henoch–Schönlein purpura, is a disease where immune complexes containing antibodies of the IgA subtype are deposited in the wall of small calibre blood vessels. This results in the walls of these vessels becoming inflamed, which is referred to as “vasculitis.”

IgAV occurs more often in the colder months and is often preceded by an upper respiratory infection, particularly by streptococcal bacteria, which seem to trigger excess production of the IgA class of antibodies.

Symptoms involve the development of dark spots (bleeding from small vessels under the skin, known as purpura), that occur most frequently on the legs, joint pain (“arthralgia”) or frank joint inflammation (“arthritis”), gastrointestinal bleeding (from blood vessels in the gut), and the detection of protein and blood in the urine (indicating a kidney disease known as ‘glomerulonephritis’).

Involvement of joints, kidneys, intestines or central nervous system can have severe consequences, often resulting in the need for hospitalization and long-term treatment with corticosteroids (e.g. prednisolone) and/or immunosuppressive drugs.

Little is currently known about the prevalence and natural history of this condition in Western Australia (WA) and we wanted to gain greater insight into this. Consequently, we conducted some research to explore the short-term effects of IgVA in WA. We also investigated the possible impact of IgVA related to the course of pregnancy.

We made use of the WARDER database which is established at UWA and, contains health information for over a quarter of a million individuals with a rheumatic condition. We included 476 children (median age 5 years) and 144 adults (median age 50 years) in the first study.

We found that over the period 1980-2015 the yearly hospital admission rates for children with IgAV have declined tenfold (3.85 to 0.31/100.000), even though age at admission and average length of hospital stay (2.3 days) remained unchanged over time.

The results delivered good news in that there were no fatalities in any of the children, however, children were more often readmitted within 30 days for observation or treatment. The lessening of the burden of disease, especially in children, can be the result of GPs being more confident to provide the right care for these patients (including less concern that the purple spots resemble those seen in meningitis). Another factor may be that there is a true decrease in disease frequency and/or severity as a result of the wider application of state wide vaccination programs (eg against various types of pneumonia) over the last 20 years.

In a second study we examined the outcomes of 247 pregnancies in IgAV patients and compared them to outcomes in 556 pregnancies in non-affected age-matched control patients.

Moreover, IgAV patients required more pregnancy follow-up visits (5.1 vs 2.5). Fortunately no disease flares occurred during pregnancy. However, the increased risk for the types of adverse pregnancy events that we observed means that female IgAV patients, require close monitoring of their own and their baby’s health during their pregnancies.

These studies are important as they yield previously unknown information and insights into the impact of IgAV on West Australians. This research was made possible through the financial support of the Arthritis & Osteoporosis Foundation of WA. The findings have been presented at national and international conferences and are being published in peer-reviewed scientific journals. Two more studies into potential infectious causes and the very long-term outcomes for this patient group are being developed and the findings will be reported to readers of Arthritis Today in due course.

Terminology Explanation:
Henoch–Schönlein purpura disease is named after Eduard Heinrich Henoch (1820–1910), a German paediatrician and his teacher Johann Lukas Schönlein (1793–1864), who described it in the 1860s. Schönlein associated the purpura and arthritis, and Henoch the purpura and gastrointestinal involvement.

Purpura refers to red or purple discoloured spots on the skin that do not blanch on applying pressure. The spots are caused by bleeding underneath the skin secondary to platelet disorders, vascular disorders, coagulation disorders, or other causes.