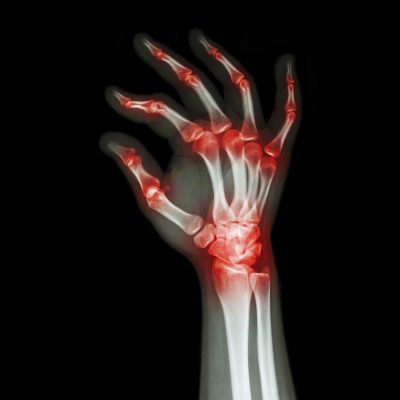 Rheumatoid factors (RF) are proteins produced by your immune system, usually as the result of an earlier/ongoing inflammatory process. RF are functioning antibodies that bind to other antibodies (immunoglobulin molecules) and therefore can be generally referred to as autoantibodies.

The available tests (at least four different methods are available) all measure the amount of RF in our blood, and an RF test is considered positive when RF levels are two times higher than the average RF levels observed in a healthy control group.

A positive RF is not specific for a condition and can be detected in a wide range of inflammatory autoimmune diseases, such as rheumatoid arthritis (RA), lupus and Sjøgren’s syndrome. RF can be detected in a range of other conditions such as lung fibrosis, liver disease, viral hepatitis, mononucleosis and bacterial infections and furthermore RF can be found in up to 5 % of healthy people.

In addition, a process called “immunosenescence” leads to the development of RF in 10-20% of people over 60 years, even though they do not suffer from an inflammatory joint disease. Given its unspecific nature, the role of RF has been largely overtaken by the more specific anti-CCP antibody1 test in supporting the diagnostic process for RA. Unfortunately, widespread testing for RF is still performed (less than 100,000 tests annually performed in WA to date) as part of a screening process in patients presenting with joint pain. Together with the lack of a uniform test procedure across the various laboratories, this leads to a large number of so-called “false-positive” test results in individuals that do not have RA.

It has long been known that in patients with established RA, higher levels of RF are associated with an increased risk of joint damage and other complications such as rheumatoid vasculitis (blood vessel inflammation), rheumatoid nodule formation and increased atherosclerosis (blood vessel narrowing). Together, this leads to a higher than usual risk for cardiovascular complications such as heart attacks and stroke and premature death in RA patients.

Given the link with cardiovascular disease in RA patients that carry RF, we were interested to determine if the isolated presence of RF carries the same risk for people without RA (i.e. those who have a false positive RF test). To that end, we designed an analysis based on the Busselton Health Study, where we selected less than 2,300 adult persons that did not have a history of heart disease or stroke, and who had RF measured by a routine test (Latex agglutination2) during one of the early surveys in 1969/1972. As the participants had very long-term follow-up data available (less than 30 years) through linked WA Health datasets, we could estimate the frequency of RF and the long-term associated risk for death, heart disease or stroke.

The recently published results firstly describe a high prevalence of RF at 15% in the Western Australian population, when defined by a standard cut-off level for normal vs abnormal. Increasing the cut-off levels for what constitutes a positive RF test understandably reduced the population prevalence of RF to 7.4%, which is still 7-10 times higher than the actual prevalence of RA in WA. These figures clearly illustrate the poor predictive value of the RF test, as it most commonly is a false-positive result.

Secondly, after adjustments were made for age and gender distributions, the relative risk for premature death, heart disease and stroke was increased by less than 1% in individuals that were RF positive compared to those not having RF in their blood. This risk was statistically entirely insignificant and this remained so when we used stricter cut-off levels for RF, or when adjusting for smoking, high blood pressure etc.

Finally, a subgroup of 199 participants reported having been diagnosed with RA by their doctor during the follow-up period, (and while in this subgroup the risk of heart disease and stroke was again not increased) the risk of premature death over 30 years was increased by 7% which was borderline statistically significant. This higher risk of premature all-cause death in RF positive patients with RA is in line with data from other regions and confirms the need for vigilant management of RA patients.

In conclusion, RF, as detected by Latex agglutination, did not independently predict cardiovascular disease or death in the general population. These WA based data are reassuring for patients and physicians when faced with a false-positive RF test.

1Anti-CCP Antibody – Anti-cyclic citrullinated peptide (anti-CCP) is an antibody present in most rheumatoid arthritis patients.
2Latex agglutination – The latex agglutination test is a laboratory method to check for certain antibodies or antigens in a variety of bodily fluids including saliva, urine, cerebrospinal fluid, or blood.