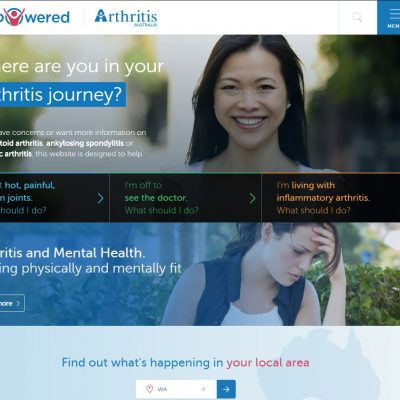 To coincide with World Arthritis Day, Arthritis Australia has today announced the launch of a new online resource, called EMPOWERED, to support those living with rheumatoid arthritis (RA), ankylosing spondylitis (AS) and psoriatic arthritis (PsA) to better manage their condition.

Although arthritis is typically associated with an older age group, the results of a new consumer survey of people living with arthritis released today, reveals the hidden struggles the condition is causing among younger Australians (aged 18-49), particularly in relation to their workplace participation, financial status and emotional health.

“World Arthritis Day is a great platform to educate Australians that arthritis is not just a condition that affects older people,” said Ainslie Cahill, Chief Executive Officer of Arthritis Australia.

“Arthritis doesn’t discriminate and can affect anyone. It is vital that anyone who is diagnosed with the condition has the support they need to best manage their condition and ensure their quality of life is not hindered.”

EMPOWERED was developed by Arthritis Australia to provide timely, relevant and actionable information and assistance to people living with RA, AS and PsA.

“Our survey found that almost half of Australians living with arthritis are only just coping or not coping at all with their condition, reinforcing why the launch of EMPOWERED is so important in helping those affected to better manage their arthritis. The ultimate goal of the online resource is to empower people living with these specific forms of arthritis to better understand and manage their condition,” Ms Cahill said.

The survey, conducted by Galaxy Research, also reveals that a quarter of 18-49 year olds believe their arthritis has reduced their ability to hold down a good job, and a third (29%) believe they have been discriminated against at work because of their arthritis1 – highlighting the shortcomings in workplace and community support of this vulnerable group of people.

“It’s disheartening to hear the serious, and often overlooked, impact arthritis is having on the lives of young people living with the condition. Many believe their arthritis has led to financial strain, has caused them to be fearful of the future and put stress on their personal relationships,” said Ms Cahill.

“I urge all Australians living with rheumatoid arthritis, ankylosing spondylitis and psoriatic arthritis, their healthcare professionals and their families and friends, to visit the EMPOWERED site for information, videos and support on how to best manage these conditions,” Ms Cahill concluded.

The EMPOWERED website has been independently developed by Arthritis Australia with an educational grant from Janssen (Janssen-Cilag Pty Ltd).

Arthritis Australia is a charitable not-for-profit organisation, and is the peak arthritis body in Australia. It is supported by affiliate offices in ACT, New South Wales, Northern Territory, Queensland, South Australia, Tasmania and Western Australia. Arthritis Australia provides support and information to people with arthritis as well as their family and friends. It promotes awareness of the challenges facing people with arthritis across the community, and advocates on behalf of consumers to leaders in business, industry and government.

About the Consumer Survey

This study was conducted online by Galaxy Research among members of a permission based panel between Friday 11 September and Tuesday 15 September 2015. Eligibility for the study was determined by claimed diagnosis of arthritis. A representative national sample of 4,332 Australians aged 18 years and older were asked the eligibility question; with the final survey conducted among n=1,052 (26%) who had been diagnosed with arthritis. The study was conducted by Arthritis Australia with an educational grant from Janssen (Janssen-Cilag Pty Ltd).