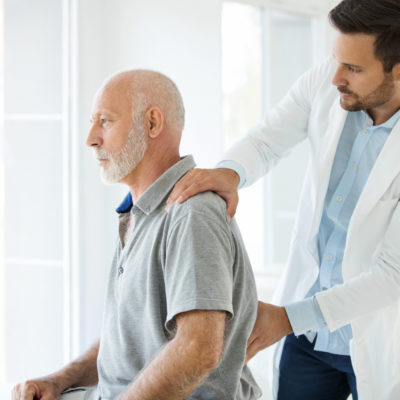 What is Ankylosing Spondylitis?

Over time, this inflammation can lead to the fusing together of the bones of the spine and of the sacroiliac joints, causing stiffness and abnormal posture. However, current treatment options mean that this feared complication is fortunately becoming less frequent.

What is the cause?

The cause is not yet known. It is likely to be caused by several factors, including genetic and environmental influences, most of which have not yet been clearly identified.

However, the general view is that AS is an autoimmune disease. This means that it arises when the body’s own immune system mistakenly thinks that some of the body’s normal cells are intruders and tries to get rid of them by releasing certain substances that cause inflammation.

How common is it and who does it affect?

Ankylosing Spondylitis affects approximately half a percent to one percent of the adult population worldwide, spread approximately equally across mane and women. Symptoms usually begin to appear between the ages of fifteen and thirty-five.

What is the relationship between Ankylosing Spondylitis and Axial SpA?

Over the past ten years, the name axial spondyloarthritis (axial SpA) has become increasingly common. This is because an international group of experts in this field, known as the Assessment of SpondyloArthritis International Society (ASAS), now recommends that AS can be considered part of a broader and more widespread group of diseases called spondyloarthritis (SpA) and, more specifically, a type of axial SpA.

How is Ankylosing Spondylitis diagnosed?

Ankylosing Spondylitis is generally diagnosed by a Rheumatologist, as this is the specialist best able to recognise the early signs. While most people will experience episodes of lower back pain at some time in their life, these will generally be due to mechanical problems in or around the spine, such as muscle strain or disc prolapse. Only about five percent of adults under the age of forty who have lower back pain will have the specific chronic inflammatory back pain that is typical of ankylosing spondylitis.

What are the symptoms?

Ankylosing Spondylitis typically starts as lower back pain that begins gradually and is often described as dull. It is felt deep in the lower back or buttocks, and may radiate down the backs of the thighs. Frequently there is also back stiffness lasting half an hour or more after waking up, which usually get better with physical activity but returns after inactivity (such as sleep or prolonged sitting).

As the disease progresses, this initially intermittent back pain usually progresses to become more constant. Night-time back pain also becomes more common and troublesome, especially during the second half of the night, often making it necessary to get out of bed and move around.

Some people may also experience chest pain, due to the inflammation of the joints between the ribs and the backbone, which may lead to incorrect suspicion of heart or lung disease.

Over time, the chronic inflammation involved in AS results in the gradual formation of extra bone tissue. This leads to the development of bony ridges between spinal bones, eventually resulting in the fusing together of two or more spinal bones and/or of the sacroiliac joints.

When such fusing develops, it is usually obvious from the progressive stiffening and abnormal curvature of the spine, which can be easily seen on x-rays.

As the disease progresses, increasing stiffness of the spine is often accompanied by a reduction in back pain, which now becomes more mechanical in nature and is due to the resulting postural changes and limited range of motion rather than to the initial inflammation.

The fusing of bones usually takes several years to fully develop, but because it occurs at an unpredictable rate in different people, it is very difficult to give an accurate estimate of this risk in the early stages of the disease. This is an important aspect of the discussion about when to start targeted treatment, especially in people with longer-lasting AS, where a combination of spinal inflammation and fusing may be present at the same time.

Frequency, presentation, and outcome of Takayasu Arteritis in Western Australia

Maintain Your Wellbeing with our New Online Programs