Psoriatic arthritis (PsA) is a chronic, potentially severe, inflammatory condition that develops in about 20-30 % of people affected with psoriasis. PsA affects women and men alike and is less common in non-Caucasian populations.

As psoriasis affects about 3 % of any given population, this means that PsA is approximately as prevalent as Rheumatoid Arthritis (RA). PsA is, however, a much more diverse condition than RA and is historically grouped into a number of subtypes based on the main presentation.

These subtypes include:
• PsA affecting the spine (spinal PsA)
• PsA involving a limited number of large joints (oligoarthritic PsA)
• PsA affecting the outer knuckles of the hands (DIP arthritis) and
• PsA that affects a large number of joints (polyarticular PsA)
(This for all practical purposes, resembles RA and includes a small group of patients where PsA leads to rapid joint damage).

Concurrent with joint symptoms, red patches of skin topped with silvery scales and nail changes typical of psoriasis, extra-articular symptoms and manifestations (i.e. outside joint areas) are frequently observed, such as enthesitis (tendon insertion inflammation) and dactylitis (sausage fingers/toes) which is mainly due to inflammation of the sheaths of the flexing tendons.

While many agents have become available for PsA treatment, it is important to remember that these do not provide a cure for PsA but are able to control symptoms. Given the diverse nature of PsA, treatment decisions are not always straightforward, as they need to take into account the joint disease subtype, extent and severity, (including risk for joint damage and markers of inflammation in the blood) as well as skin disease type and severity. There is no clear correlation between the severity of the skin and musculoskeletal symptoms in PSA and generally, the predominant manifestations should guide treatment choices.

Current agents for PsA include conventional anti-inflammatory drugs such as Ibuprofen and Diclofenac, which are available as gels for local application to render areas and as tablets if a more widespread effect is needed.

For a number of PsA patients, stronger, so-called disease-modifying antirheumatic drugs may be needed and as these have been around for a long time, there is considerable experience with these therapies. This includes the use of Methotrexate, but also Leflunomide (Arava), and sulfasalazine (Salazopyrine), Azathioprine (Imuran) and Cyclosporine (Neoral/Sandimmune).

The proposed sequential use of these drugs again may differ between patients, depending on the balance between the rheumatological and dermatological aspects of the disease. Side- effects of these drugs vary but may include liver damage, bone marrow suppression and severe lung infections.

Over the last decade, new drugs have been developed that offer a more targeted approach to the disease process than the broad action of standard antirheumatic drugs. Such targeted therapies include monoclonal antibodies developed and produced in the laboratory, which are capable of interfering with a single molecule involved in the disease process.

These drugs all have to be administered as injections as they cannot be absorbed in the intestines. Recently, the synthetic drug Apremilast has been approved; this targets the enzyme phosphodiesterase 4 in the cell machinery, to reduce immune cell overactivity, and can be taken as a tablet.

Given the expanding arsenal of available drug therapies, the European League against Rheumatism (EULAR) as well as the Group for Research and Assessment of Psoriasis and Psoriatic Arthritis (GRAPPA), has published recent and separate recommendations for the most appropriate current approach to PsA management.

The recommendations overlap largely, with the main difference being that the GRAPPA recommendations have added in advice on treatment of predominant skin disease (see figure below). 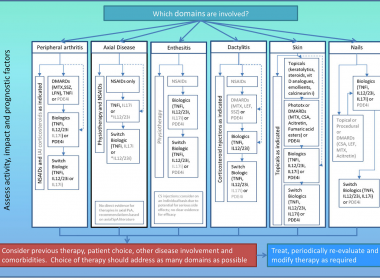 The text and schedule (in the figure) make it clear that a more personalised approach to treating this frequent and nasty condition is slowly becoming a reality. This positive development will hopefully continue to progress over the coming years and identify new treatment targets and allow specific drugs to be developed.

While still very much a futuristic illusion, there is now a glimmer of hope that more advanced personal medicine can become a reality. For example, doctors can make use of a range of biomarkers, including genetic signatures, in order to stop PsA from developing fully, or even prevent psoriasis and/or the later development of joint and soft tissue inflammation in the first place.

Therefore, it is difficult to make general recommendations for treatment PsA patients other than the standard lifestyle changes of weight reduction, cessation of smoking and avoidance of overly stressful situations.

While an overall positive development, a major concern is whether our health care systems will be able to sustain the current environment of severely inflated prices for new drugs, while continuing to provide sufficient support for patients suffering from the very diverse condition, Psoriatic arthritis.