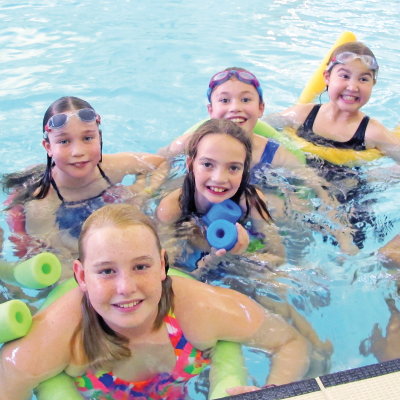 Arthritis & Osteoporosis WA’s Juvenile Idiopathic Arthritis (JIA) Hydrotherapy program for school-aged children was introduced in 2017 and has enjoyed large class numbers since this time, offering many benefits to the children and their parents.

Children in a joint ‘flare’ are able to continue to exercise despite swelling, stiffness and pain. This is due to properties of water, including buoyancy, resistance and hydrostatic pressure, along with the warm water (33-34 degrees Celsius) reducing stress on joints.¹

During flare or remission, hydrotherapy enables physiotherapists to work on strengthening, balance training, and functional skills training while at the same time providing a fun, motivating and safe environment.

In 2018 the Ottawa Panel released evidence-based clinical practice guidelines for physical activity in the management of JIA. Hydrotherapy achieved a grade A evidence level for decreasing the number of disease-active joints.²

Studies have also shown an increase in flexibility, strength and an improvement in pain, joint stiffness and quality of life.³ Exercising in water has also shown to promote similar benefits as those performed on land, and high and low intensity programs seem to be equally effective and safe.³

A group hydrotherapy class can also provide social and psychological benefits. Families with a child with JIA are encouraged to find support groups, such as the quarterly group also run at Arthritis and Osteoporosis WA, so they can socialise with other parents and children who face similar experiences as themselves. A group JIA hydrotherapy class provides an opportunity for this connection and support as indicated through parent interviews.

“This is the most positive activity for my child, each week she looks forward to coming, not only to spend time in the water but to interact with the other children.”

“The joyfulness and skill of the physiotherapists are fantastic; along with making the classes interactive and fun, they adapt the games and activities to ensure all of the children can participate.”

“The hydro class is great for not only my child’s mental and physical wellbeing, it also offers me the opportunity to talk to other parents and develop a support network.”