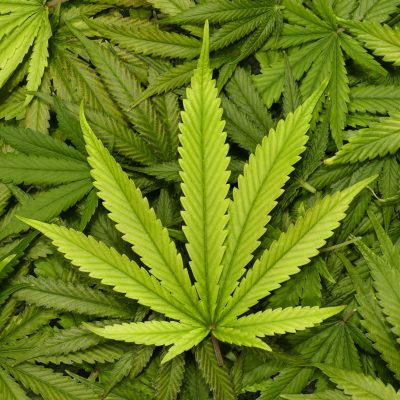 The plant Cannabis sativa has long been used as a medicine, either as a leaf or through its extracts. It has been valued as a pain reliever for people suffering from intractable diseases.

Medicinal cannabis is now enjoying a resurgence in many countries that is largely being driven by popular demand, but the scientific evidence that the herb can treat a wide range of ailments is thin.³

The combination of anecdotal information and community advocacy means that doctors can often find themselves in the position of being asked by their patients to provide informed advice about medicinal cannabis.

This article will explain some of the frequently encountered terms in the cannabis literature and will also explain why cannabis does not have a legitimate place in current rheumatology practice.

The plant Cannabis sativa contains over 60 cannabinoid molecules and between 200-250 non-cannabinoid compounds.¹ There are many different strains and the amounts of active substances they contain depend on the particular strain, the parts of the plant harvested, and the methods of processing them. Producers are cultivating strains with progressively increased concentrations of the psychoactive molecule, tetrahydrocannabinol (THC).²

It is the chemical responsible for most of the psychological effects found in the cannabis plant.

There are three recognized types of cannabinoids²:

2. Synthetic cannabinoids include dronabinol (the same molecular formula as Δ9-THC), nabilone (a synthetic analogue of Δ9-THC), and oromucosal nabiximols spray (a combination of Δ9-THC and CBD).

3. Endocannabinoids (i.e. made within the body) are natural chemicals derived from long-chain fatty acids. They include anandamide (AEA) and 2-arachidonoylglycerol (2-AG) whose basic functions in animals can be summarised as “relax, eat, sleep, forget, and protect.”(6)

A receptor is a protein molecule on the surface of a cell that receives chemical signals from outside the cell. When they bind to a receptor these chemicals cause some form of cellular response.

Two cannabinoid (CB) receptors mediate many of the effects of cannabinoids. CB1 is expressed predominantly in the central nervous system (particularly in brain areas involved in motor control, memory and cognition), whereas CB2 is primarily expressed in immune cells. Cannabinoids can activate either the CB1 or the CB2 receptor, or both receptors.¹

Functions of the endocannabinoid system

Endocannabinoids are also involved in the control of brain processes and circuitry that underpin social anxiety and reward. (8)

Endocannabinoids are produced “on demand” in response to stressful events and contribute to the eventual termination of the stress response, thereby helping to return us to a steady state (known as homeostasis). This adaptive function has the potential to be harnessed as a therapy to improve sleep and appetite, and to reduce pain and inflammation.²

Endocannabinoids act locally when and where needed and then they disappear extremely rapidly. Because endocannabinoid receptors are found throughout the body, it is difficult to target specific physiological processes without producing adverse effects.¹ This is why drugs that directly target the endocannabinoid system have to date not been successful.

What are the medically useful compounds in preparations of Cannabis sativa?

Cannabinoids are potent anti-inflammatory agents.(4, 5) Those found in the leaves and flowers of Cannabis sativa (particularly the molecules THC and CBD) have been much studied, but other compounds, such as cannabinol and cannabichromene, and the volatile terpenes (fragrant oils), could also have intriguing properties. The plant’s constituents might act alone or in combination.

In summary, THC has both psychoactive (producing a “high”) and analgesic effects (pain relief), whereas CBD has immunologic functions.

Authorities that legalise cannabis for medicinal use insist that the amount of THC contained in herbal cannabis is relatively low.

How to deliver cannabis-based medicines

Inhalation
Inhaled cannabis reaches peak blood levels within a few minutes. Heating is required to convert the THC acid precursor to the active molecule. However, smoking the dried product is not recommended because of potential lung damage from toxic hydrocarbons, tar and carbon monoxide. Inhalation via a vaporiser involves less heating and is probably safer, with less production of toxic hydrocarbons.²

Oral administration
Onset of action is delayed and the effects are prolonged but gastrointestinal absorption is erratic and the liver degrades cannabinoids.²

Sub-lingual spray
An oral under-tongue spray (Sativex) has been recommended in the treatment of moderate to severe spasticity in patients with multiple sclerosis.(4)

Authors of three recent systematic reviews concluded that current evidence is insufficient to allow for any recommendation for any cannabinoid preparation for any rheumatological condition.

Searches of the literature have failed to find any randomised controlled trials of dronabinol or of medicinal cannabis in relation to rheumatic diseases.

Although data consistently show the beneficial effect of cannabinoids in RA murine (mouse) models and in vitro experiments, clinical research focusing on cannabinoids disease modifying properties has yet to be conducted.(4,5)

From consumer reports, cannabinoids present a positive trend in treatment of patients with fibromyalgia. Moreover, considering what else is available, cannabinoids appear to be a valid option, although, as with other conditions, more research is needed.²

The risks of cannabinoids

Adverse events are common; therefore, those who are to be prescribed medicinal cannabis must be made aware of them so they can give their informed consent.

Some of the risks of chronic use include impaired mental ability, chronic bronchitis, risk of cancer (from smoking dried product), and cannabis dependence (9% of adults, 17% of adolescents.²

Is there a role for rheumatologists?

Because pain is so commonly experienced across the broad spectrum of rheumatic diseases, rheumatologists will often be asked to provide their patients with up-to-date information on the known benefits and risks of these
substances.²

Rheumatologists will encourage their patients to explore the available pharmacological and non-pharmacological strategies to better manage their pain and, when available, a synthetic cannabinoid preparation should be tried prior to a recommendation for the use of herbal cannabis.²