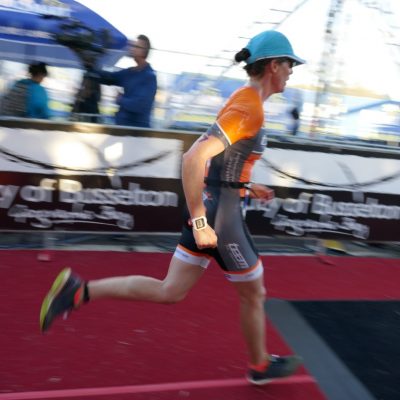 I have always been a very active person and have been a competitive runner since the age of nine, competing at a national level as a teenager in the United Kingdom.

However, in early 2010, I started experiencing a lot of pain in my right hip. The pain gradually increased to the point where I could not run and it would wake me up during the night. Suddenly, not being able to do the things that I loved and that made me who I am, made me feel very lost.

Over the next few years, I worked with a physiotherapist and tried a range of different treatments to relieve the pain. Suffering from persistent pain had a huge impact on my life. After being in constant pain for two years, I saw an orthopaedic surgeon for a second opinion and eventually had surgery. I had to wait a few months for the surgery and wanted to be in the best shape possible.

Whilst it had taken a long time to come to terms with my limitations, I also knew that for the benefit of my health I needed to remain active, so I continued to swim and I began cycling.

The surgery was a big procedure with a long recovery. Afterwards, I was very strict with my rehabilitation, which included walking and strength exercises in the pool, as well as strength exercises in the gym. It was about four months before I could ride my bike. Rehab was tough and I often found it hard to motivate myself but I knew I had to if I wanted to recover well.

A year after the first surgery I started having the same pain in the left hip. I consulted my physio and after no improvement, I consulted my surgeon. The x-rays and scans showed my left hip had the same problem. My surgeon told me to consider if I wanted the surgery, as there was a possibility that I might not ever be able to run again. These words were devastating to hear, as running was a big part of my life.

I spent some time thinking about it as I felt I had only just recovered from the first surgery, and I was not sure if I wanted to go through all of that again. I made the decision to proceed with surgery, as I knew the pain would only increase and the likelihood of living a more active lifestyle would diminish if I did not.

In February 2014, I had the second surgery and was better prepared this time, which made it easier in some ways. Again, the rehab was a long process and after two months, I began feeling worn down by it all.

My partner took me down to Busselton to watch the Half Ironman triathlon (1.9km swim, 90km bike ride and 21.1km run). Even though I was still on crutches, still in pain, and had a great deal of rehab ahead of me, I felt inspired and motivated while watching the event and told my partner that I wanted to compete in the race in 2016.

Setting that goal really kept me focussed during rehab. There were many times I did not feel like going to the pool or gym and sometimes felt down at how little I could do but one of the most important things to do in rehab is to be consistent. I knew that the consequences would mean I would not be able to run or lead an active lifestyle; and in the darker times, that is what kept me going.

It took a year of hard work but eventually, I could run. It started with very small runs interspersed between walking. It was very important to be consistent and to increase the time gradually in order for my body to adapt as it had been almost five years since I had run!

Finally, that day arrived; May 1st, 2016. Two years after I had set the goal to compete in the Busselton Half Ironman, I was standing on the beach at the start line. I was nervous but I also felt grateful to be there as it felt like a reward for all the effort I had put in during rehab. After the swim and ride, I began the run and smiled the whole way round. It was hard work, yes, but I felt so happy to be there, remembering standing on the sidelines only two years earlier, and I could not believe how far I had come.

After completing the Half Ironman, I decided to set my sights a little higher to a full Ironman. I discussed this with my physio and decided to use a coach to help guide me in the right direction, as this was way beyond anything I had ever done before. The training was a step up from the half ironman and was a huge commitment. I put so much of what I had learned during rehab into training; for example, consistency, resting well and listening to my body.

December 4th, 2016 I competed in the Ironman Western Australia. Not only did I finish, I ran the marathon without any pain in my hips (probably the only part of me that did not hurt!).

I am now pain-free and am able to run and live an active lifestyle after five long years, with many difficulties along the way. I am now very mindful of performing 2 to 3 strength sessions per week to keep my body strong. I was grateful to have had the support of my partner and friends throughout the whole process as having a strong support network made a huge difference.

Finally, I learned so much about goal setting. After my first surgery, I had one goal, ‘to run’. This made rehab much harder as that goal seemed so unobtainable. Therefore, after my second surgery,

I wrote 50 short, mid and long-term goals. Although the last goal was still ‘to run’, it was much more satisfying and motivating to be able to tick things off the list (however small) on the way to achieving my main goal.